My random evening spent axe throwing in Toronto was one of pure fun and hidden carnal enjoyment when I heard the axe thud into the hanging wood target. 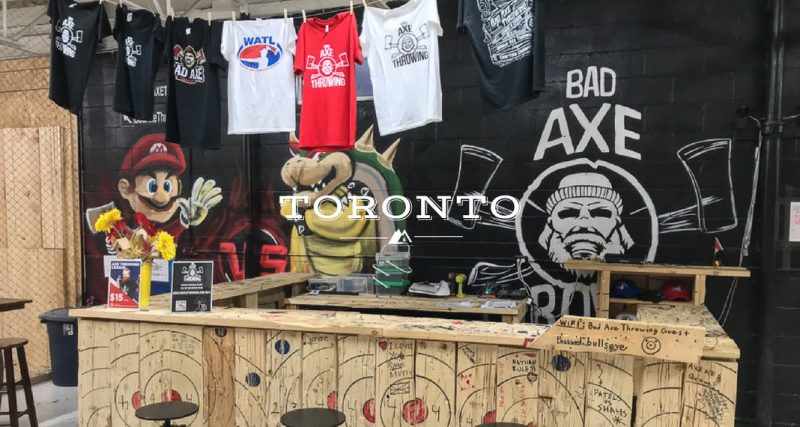 I now know that tossing a sharpened chunk of metal so that it will stick into a piece of wood takes a lot more skill than it sounds, especially when you throw alcohol into the mix.

A group of Emma’s co-workers planned the Sunday axe throwing event and invited us along (who wouldn’t want to randomly go BYOB axe throwing). I had never been to an official axe throwing establishment so I had no idea what to expect. Honestly it blew me away. Axe throwing is a lot more complicated than just chucking an axe at wood as hard as you can. Our teacher and overseer at Bad Axe Throwing, in Toronto, was the absolute best. He was quite informative and helpful progressing our various skill levels to where we could stick the axes before we officially began playing games.

Since it was late Sunday night, our booking was the only one, we basically had the whole space to ourselves to jam tunes, have fun and throw axes. We started the night out with the mandatory accident waiver and a brief introduction about Bad Axe Throwing. After we signed our life away and grabbed another beer our teacher showed us the proper axe throwing forms. The teacher was engaging while he explained the correct way to handle and throw each type of axe. After everyone had a few practice tosses he helped us individually to fix our technical mistakes.

When mostly everyone got the gist of axe throwing we moved on to team tournaments. Axe throwing was in a way just like playing darts and throughout the night the teacher had a great system of games lined up that kept us competing as teams and individually. There was never a dull moment the whole night, except for a few axes.

After our time was up a champion was chosen, it wasn’t me, my honed skills declined as the beer increased, and our teacher took time to show us a few trick throws, like underhand and double axe, along with how to toss a fireman’s axe.

My evening spent axe throwing was one of fun and hidden carnal enjoyment. Axe Throwing was way more in depth than I thought it would be, which is a great thing. The whole night I kept learning something new. We were doing different games that kept everyone interacting and competing. If you want to have a fun group night out and to try something different, make sure to check out Bad Axe Throwing!

If you want to learn more about my summer activities visit the Destination Canada page or check out my Dave Matthews Band experience! 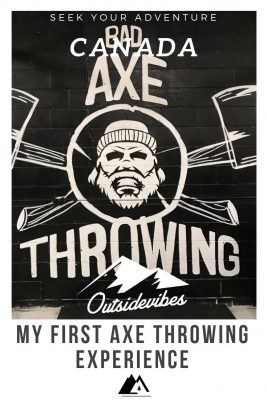