This was the year of injuries and they all started with my Cook Island injury. I was only a few days into my new RTW adventure when it happened. 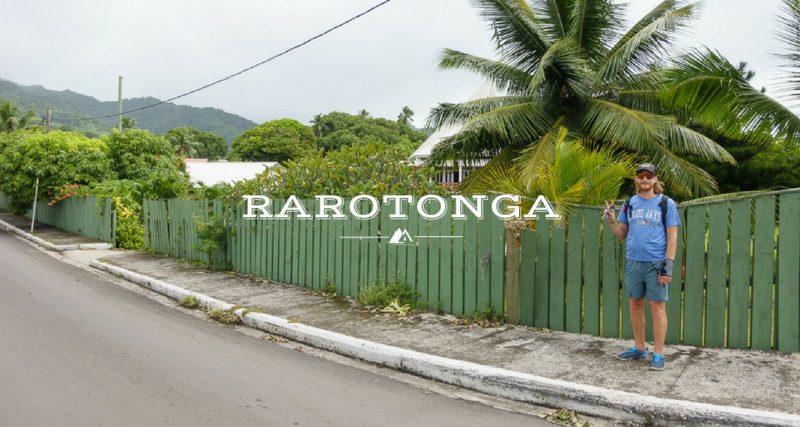 Turns out 2017 became another year of travel injuries and it all started with my Cook Island injury. Emma and I were only a few days into our first travel destination, Rarotonga, a small island located in the South Pacific, when I got hurt.

We were staying in a bungalow down the road from the main hostel, so at the beginning of our trip we had a few great and private days of sunshine, snorkeling and beach vibes before we decided that we should probably socialize as we were invited to dinner and drinks with the other backpackers in the main dorm.

That night started out like any other backpacker get together, everyone mingling and introducing each other, telling stories and asking questions. As the sun set the drinking games came out and the beer started to flow. A guy from the UK made the first beer run for the group, not much later I realized that it was almost 9pm, closing time for the store. I volunteered to make the next run so I could also grab my Bluetooth speaker from our bungalow. I hopped on Emma’s bicycle, because it had a basket, went to our place for the speaker and headed to the store.

It wasn’t until I was already biking on the road and being passed by the first car that I realized how dark it was outside. The road had no lighting and for some reason there was a lot of traffic. Worried about cars and drunk driving, which is a big thing on the island, I decided to hold my cell phone behind me and use the flashlight as a light so passing vehicles would see me.

Drunk biking is no better and I should not have been riding after having a few beers, let alone in the dark without any lights or reflectors, and one handed. Shortly after leaving Emma and I’s bungalow a scooter pulled out of a hidden alleyway directly in front of me. I reacted by grabbing the break with my only free hand, unfortunately the break I grabbed was the bike’s front brake, causing me to go ass over tea kettle across the front of the bike. My hat, phone and speaker went flying away, I landed on the road, left wrist instinctively extended to stop my fall while my right side was impaled by a handlebar and the bike basket before I rolled into the street.

I quickly peeled myself off of the road, grabbed my cell phone, speaker and bicycle then limped to the side of the road to avoid the approaching vehicles behind me. Two cars passed by and I limped back onto the road once more to grab my hat. From where I crashed I could see the store so I shakenly hobbled the short distance along the side of the road.

Turns out I was too late, the store was closed. Which means me dumbly volunteering to bike was worthless and now I am hurt. A moment later a man showed up to the store on his scooter and started banging on the door in between lighting a cigarette. After his smoke was lit he noticed me and started up a conversation. He asked if I wanted to buy weed. I politely declined and went back to checking out my injuries. Standing in front of the store my body started to ache as my adrenaline wore down. As I turned to leave and the man started talking to me again while still banging on the door. The man assured me that if you knock long enough the shop worker would come back and sell beer. He also invited me to a party at his house, just down the road.

A couple of seconds later a young guy unlocked the shop door and asked what we wanted. Me just wanting to go home at this point but the hook for the group, told him my list of beer and the other guy asked for his usual. The worker went back inside, locked the door, then came out again with our requests and a general total for each. My new friend once again invited me to his party which I politely declined saying I needed to get back to my friends. As he hopped on his scooter, tucking his bag of beer between his legs, he gave me directions and said feel free to come by with my friends and we could play pool.

Leaving the store I walked my bike back to the hostel. Once there Emma asked what took so long as I told her what happened. Knowing I was hurt but not wanting to just up and leave, plus with no way to the hospital on the island, we stayed at the party for a little while before going back to our bungalow where I immediately splinted and Ace wrapped my wrist for the night.

The following morning I awoke to rain, pains, scrapes and a headache. Growing up I have broken and sprained my wrists before. My left wrist felt exactly like when I broke it as a teen. Along with that some of my ribs felt cracked, my side was on fire and I could barley take shallow breaths. Outside it was down pouring rain but my injuries hurt so much that Emma and I walked to the main road where we eventually waved down the island bus to try to go the hospital. The whole ride I was filled with embarrassment for my stupidity. Unfortunately with the rain the normal road was flooded so the bus took a different route that bypassed the hospital and headed straight into town. Not wanting to hitchhike in the rain to find the hospital and not knowing even if it would be open on the weekend, I settled for a wrist splint that I found in town.

The next few days it kept down pouring, due to cyclone Cook and each day I was getting more depressed. I came up with excuses and avoided the hospital. In reality I did not want to face the fact that I might actually be hurt once again. That my idiocy might ruin this new trip for Emma and I. I kept thinking back to Turkey when I broke my foot and going home in a cast.

Our last few days on the Cook Islands came and went without me going to the doctor. My stubbornness and shame would not let me face the confirmation of how hurt I was. Hindsight I should have went to the hospital. Unfortunately I was really hurt and by the time I admitted it to myself a couple of weeks had passed by. Every day for weeks my wrist and rib pain kept getting worse not better. The moment when I admitted that I should have done something, I was on a mostly deserted island in French Polynesia. I was hundreds of miles away from a hospital and had an itinerary that would not take me close to one or French Polynesia’s main city for almost two months.

During the next few months Emma was a champ, she helped carry my bags everywhere. I could not move my wrist or put any pressure on it without pain, even with it splinted up. I also had to avoid most every activity to ease the pain in my ribs. That pain lasted for 5 months before I finally felt okay. But as soon as I felt better I got into my next injury in Thailand which was a trip ender for us.

Be careful when having fun and traveling. Make sure to go to the hospital if you have the slightest feeling that your bruises and scrapes are more like breaks and sprains. Don’t be stubborn like me during my Cook Island Injury. Also be wary, most travel insurances will not cover any injury if alcohol was involved. But depending on where you are traveling, the cost for a general hospital check-up won’t ruin your trip’s budget. It is better to spend some money and have the piece of mind.

I hope if you read this you will try and be safe on the road. This was my second injury abroad and unfortunately not my last one. Travel insurance is the one thing I will never leave home without. I have experienced and seen horrible accidents, even to people on a short holiday, it is always better to be safe than sorry. 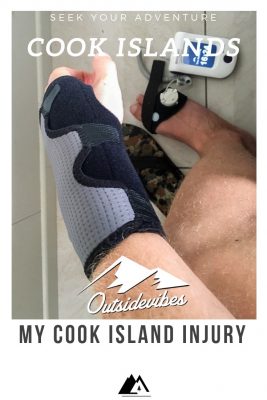